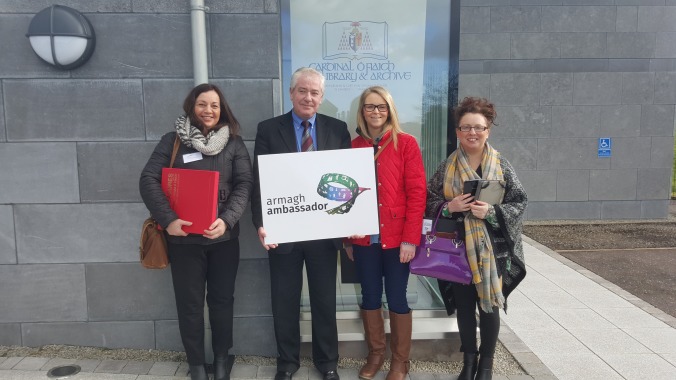 The Cardinal Tomas O’Fiaich Library is situated behind St. Patrick’s Roman Catholic Cathedral overlooking the Moy road out of Armagh City. Established by Cardinal Cathal Daly and found next to the Cathedral grounds, it is in fact a free independent library!

On entering the library, we were greeted by Roddy Hegarty (pictured below), a gentleman who was a breath of fresh air ironically in a place filled with aged and faded artefacts. Roddy has endless stories to share and does so in a way that you cannot help but be in awe with his enthusiasm and witty delivery! The Armagh Ambassadors were treated to artefacts such as the actual trowel used to lay the foundation stone for the Cathedral, as well as a portable alter stone used in the 18th century when the law prevented the open practice of Catholic religion here.

Temporary altars and masses were held in local farmhouses and homes but afterwards they were quickly removed. Also interesting was a road bowl which had been confiscated from an Armagh man by a Sergeant some years ago and later returned via the BBC 50-60 years later, a great story but you’ll have to call in and see Roddy for more on that!

The library is an excellent source for church registers for Armagh, Louth and some of Tyrone and Derry up until the 1900s. It also houses original documents relating to business military and church activities from archives in France and Spain dating between 1500s to 1900s. It also is an excellent source of Irish heritage including detailed sporting history, Irish language, the Irish overseas and also poetry. It really is a treasure trove of beautiful handwritten manuscripts, letters and coats of arms, all with their own story to tell!

We had two speaker for our Nosh and Knowledge Session this week with  Roger Nesbitt of the Charles Wood Summer School and Cathy O’Kane from Armagh City Banbridge & Craigavon Borough Council.

Charles Wood, a renowned musician and composer, was born at 11 Vicars Hill, Armagh and  went on to become a Professor of Music at Cambridge University.  He is remembered mainly for his sacred music and this is the main focus for the annual Summer School. The festival itself is a week long event filled with concerts (both choral and instrumental) as well as workshops for singers, choir leaders and conductors.

Cathy gave us an enthusiastic overview of upcoming evenings events including a fantastic fashion event incorporating local boutiques from Armagh, Banbridge, Portadown and Lurgan. Not forgetting the Seven Hills Blues Festival and the Food and Cider Festival, we really have a busy year ahead with plenty of events to attend. 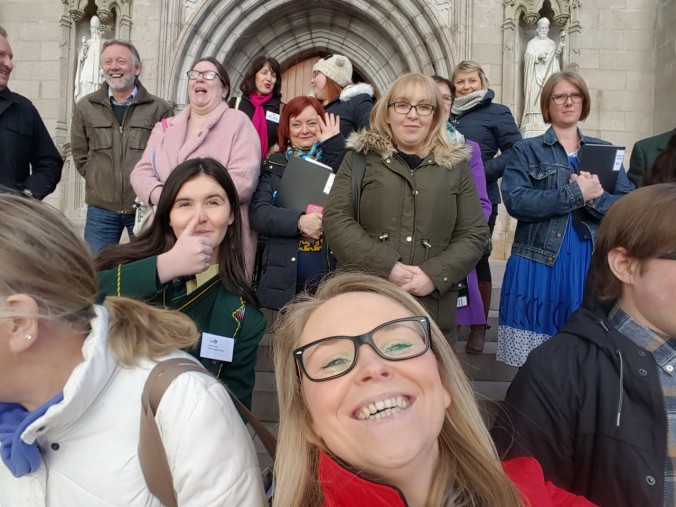 Next up was a brief walk to St Patrick’s Cathedral to enter the amazingly grand, world famous twin spires which overlook our city. After an Armagh Ambassador selfie on the steps, we were greeted by Jack O’Hare (pictured below), a lovely man with a wealth of knowledge and history running through his veins. Jack told us may important details of the Cathedral including the fact that it wasn’t meant to look as it does today at all. In fact, the main entrance was to be at the side and there were no twin spires either.

The Cathedral has undergone many stages of construction, deconstruction, cosmetic and structural changes throughout its many years under the surveillance and influence of various Archbishops to become how it looks today. Jack can tell every detail as though he witnessed all himself and a tour with him is a must to unearth the incredible history and hurdles this Cathedral has overcome to stand proud amongst Armagh today.